Building Relationship at the Youth Center 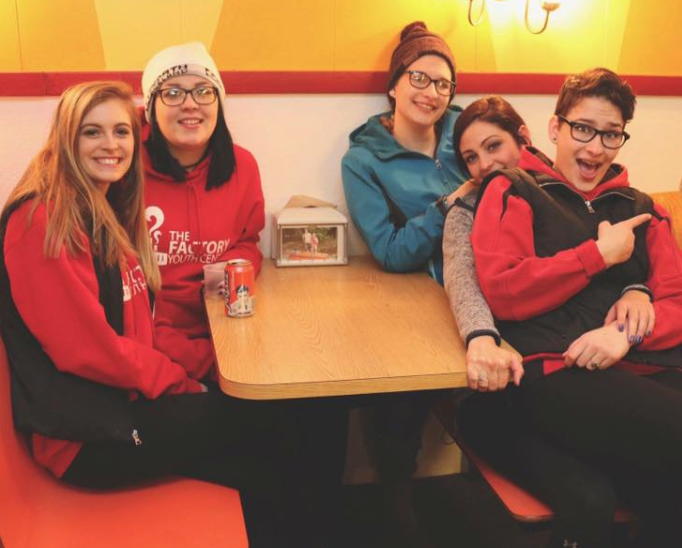 The statement, “Pray for The Factory” and the question, “Who am I a neighbor to?” were written on a prayer card at Keystone Church on August 9, 2009, by Elizabeth (Ebeth) Hoover. Ebeth was intrigued by the mission of The Factory Ministries presented by its Executive Director, Chuck Holt, and the sermon of Pastor Keith Rohrer to love and serve her neighbors. Six years later, Ebeth called for an update on The Factory Ministries and got more than she bargained for.

Ebeth met with the Youth Center Director on a Wednesday and started volunteering at the Youth Center the next day. Ebeth was intimidated and pretty discouraged by her first night volunteering. The teens were distant and it was hard to break the ice as a stranger. But Ebeth wanted to stick with it.  “It was out of my comfort zone. It was stretching for me to change my circle from comfortable to uncomfortable.” This sentiment resonates with many new volunteers as they interact with the complete honesty of the teens. Relationship is key to respect and trust, and relationship takes a large investment of time. The second week volunteering, Ebeth was encouraged by the connections she made with three girls. She has been volunteering at the Youth Center and mentoring those three girls ever since.

Not long after starting at the Youth Center, Ebeth was changed by her interaction with the teens. One Open Door Night, two girls stayed for prayer after the lesson. As Ebeth listened to requests of prayer for depression, for the overdosing death of a distant father, she was moved. She recalls, “That broke me. We cried and prayed together.” Ebeth encouraged the teens that God could heal them even though they felt like they weren’t good enough.

Hearing other prayer requests for safety made Ebeth understand the need for a “safe place”, part of the mission of The Factory Youth Center.  So many teens in our community struggle with insecurity in their homes, in the constant transition of their lives. Having adults who believe in them, who can be trusted and depended on, is crucial to the teens. But the impact of the Youth Center goes both ways.  On the significance of volunteering in her own life, Ebeth states, “It has taken me out of my own selfishness and my own world, and put me into theirs. Not only that, but I want to involve them in my own life.” Ebeth’s desire to journey together with the teens is one of the reasons she is influential in their lives. One teen said, “She [Ebeth] is always there when I need to talk to someone. She encourages me not to listen to what others say but to listen to what God says about me.”

The same honesty that was initially intimidating to Ebeth is now an avenue for friendship, “The girls that I have interacted with have no hesitancy in inviting me into their lives, to see their homes, to meet their families.” From Starbucks runs to manicures, Ebeth continues to invest in the lives of the teens. This investment is in the form of time, words of encouragement and truth, and the love proven by longevity of relationship.

When asked what has made Ebeth commit to a night a week, plus events, plus mentoring dates, she replied, “When I was in high school, I remember how important it was to have someone in my life who was older than me, to just listen to me. And I feel like I am that for these girls.”

make a difference
in your community

give today to empower individuals, connect resources, and build community.

We appreciate your financial support. Your dollars help sustain our community development efforts.
Partner With Us
X
X